When Crackers Won't Cut It: Carnivory in Parrots

Animals do surprising things, and this should come as no surprise. After all, they are more than just entries in field guides; they are living beings and individuals which react different to a variety of unique situations. Most animals are both intelligent and intuitive, and will change their behavior to better survive an unlikely situation, or take advantage of situations which they find favorable.

As evolution is driven at its core by the need to gain resources for survival and reproduce, it makes sense that many surprising behaviors are related to food and sex. I’d like to address the former rather than the latter, and you can busy yourselves by searching for articles on the subject. Trust me, there’s enough material on strange animal sex to give you nightmares.

Sometimes, animals eat things that we don’t expect them to. Lions, jaguars, and other large carnivores will readily eat fruit when preferred prey is limited. Seals and walruses will chow down on seabirds when on land. Deer and cattle have been seen time and time again chewing on bones and eating young birds to gain essential calcium in their diets. But perhaps one of the most intriguing cases of bizarre gastronomy in animals is the fact that some parrots will eat meat when given the chance.

Granted, this is uncommon, but this is the norm for unexpected behavior. As far as observed instances of carnivory in parrots, I believe that only two species have been readily seen eating other animals/animal products: the kea Nestor notabilis and, just recently, the rainbow lorikeet Trichoglossus moluccanus.

Kea: Scourge of the Kiwi ski slopes
The kea is a weird parrot to begin with - it lives in New Zealand (already a sure-fire sign that it is a strange bird), specifically in the chilly alpine regions of the country, where it can be seen engaging in play behavior such as rolling in the snow and destroying your car. They are also really smart, even for parrots: in the wild and captivity, they have been able to solve manmade puzzles in order to get treats (non-meat, I presume).

So what does an alpine, cold-weather parrot eat? Like most parrots, most of its diet consists of vegetation, with a few invertebrates thrown in. However, it is also an active predator. In addition to rabbits (don’t feel bad, they’re an exotic invasive in New Zealand and deserve it), kea will also infiltrate the nest burrows of shearwaters and drag out their fat, unfledged chicks. I’d just like to state, at this point, that if you’re still doubting that birds are dinosaurs, it’s not too late to change your mind. 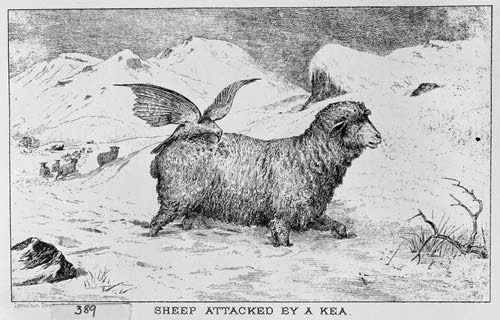 Perhaps the most long-winded and interesting debate over the diet of the kea is whether or not it preys upon sheep. Sheep, as you know, account for most of New Zealand’s population. There have been observations of kea landing on sheep and ripping into their flesh. Yes, really. There’s even an old photo of a sheep supposedly killed by kea, showing tufts of wool around the carcass where the birds attacked. Knowing the kea’s track record for being the most metal and un-parrot-y parrot, I would not be surprised if these sheep attacks are more common than we realize.

Rainbow Lorikeet: The true sparkleraptor
Appparently, at least one person in Australia leaves out meat for endemic carnivorous birds to come and eat. Besides being the most awesome bird feeding system ever, the offerings attract kookaburra and currawongs. But recently, a new bird has taken a liking to the meat, and has even began chasing others away.

Now, I’m still trying to wrap my head around this one, honestly. Lorikeets are largely nectar-eaters, occasionally taking fruit and nuts as well. Some zoos have feeding stations for them, allowing you to walk among them with cups of simulated nectar, which they will swarm around. I think next time I go to one, I’m going to bring a pork chop instead.

What could lorikeets possibly want to do with meat? Why this sudden change in appetite? It’s likely that the meat contains essential vitamins and proteins which are beneficial to the parrots. However, perhaps it is just a matter of preference - in the yard in which this occurred, native flowering and fruiting trees were even more abundant than the meat scraps left out at the feeders. Even if this is an isolated case, I am curious to see what ornithologists make of it - continued observation of this bizarre instance is needed in order to better understand it.

I often like to think of parrots as the primates of the bird world in terms of their social behavior, feeding habits, and adaptability. And, just like chimpanzees, it seems that particular species have a fondness for something other than the usual fruit or nut. Just keep an eye out the next time Polly starts eyeing the family cat.
Posted by Unknown at 9:42 AM